I've produced most of my homes electricity for several years now.  Seven years ago I installed a 10 Kw Bergey wind turbine and three years ago I added an additional 3000 watt solar array with battery storage and inverters.  At peak production with both devices I am producing 13,000 watts of power on a sunny and windy day.  On a monthly basis I have seen as much as 1200 kilowatt hours of production from my turbine and an additional 360 kilowatt hours of power from my solar array.  The average home uses 600 kilowatt hours of power on a monthly basis, so at times I am able to produce more power at my home than two average homes in the U.S. consume. This production ability came at a pretty steep upfront cost.  I have around $60,000 in my turbine and about $20,000 in my solar array with its associated inverters, batteries and top of pole mount. 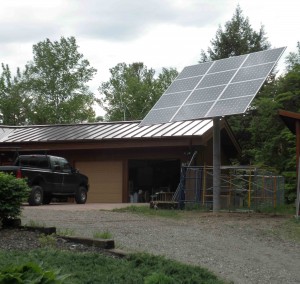 I have read in various places studies showing the costs for energy conservation compared to the costs of energy production.  The number that I have seen is on the order of for every $1.00 spent in conservation, it would take about $8.00 spent to produce that amount of energy.  So what does this have to do in real life when thinking about building an alternative energy system?  Well quite simply the less energy you really need to produce to live comfortably, the smaller the investment you need to make to produce that energy.

A well thought out off-grid home is going to be well insulated as well as well positioned to take advantage of passive solar heating, natural lighting and have efficient electrical appliances and lighting.  The lifestyle of the inhabitants of that home will be different as well.  They will turn off lights when not in the room.  If they watch television, they will turn it off when it is not being watched.  Pretty common sense items you would think, but not in reality.  It is amazing the people that I have had as guests in my home that leave the lights on, leave the television playing and just waste electricity.  I guess they either believe since I produce my own, it is free to waste it.  It just takes a second to turn off appliances not being used, and all that conservation adds up pretty fast when you figure it is an eight to one return.

The inhabitants of a well designed off-grid home will most likely heat with wood, cook with propane or natural gas, and use efficient LED lighting in the home.  The electrical appliances will be energy star rated and they will decide what is truly important to them.  The home will probably not have a dishwasher, although it could.  It depends on what they consider necessary for their lifestyle.  I have seen some pretty amazing properties that were built off-grid and produce all their own electricity.  I have also seen some pretty modest homes with modest energy production investments with above average energy consumption as well.  Utilizing a conservationists approach to living your life will yield large dividends in money saved and still living comfortably in an off-grid home.  Decide what is important to you, what you could use less of, what you can get by without entirely and have an appropriately sized system installed for your home.  A good friend of mine with hundreds of off-grid system installations under his belt has stated that he never tells anyone that it can't be done, what he says is "how large is your budget?"  Eight to one adds up pretty fast.